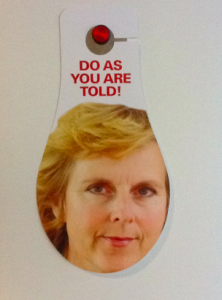 Today in the European Parliament we were honoured by the presence of pictures of Climate Commissioner Connie Hedegaard. ”Do as you are told and get the vote right this time!”, was the tagline of the paper industry’s flyer mocking the Commissioner’s interpretation of democracy concerning backloading. Simultaneously, the energy industry, ETS and environmental lobbies are pushing for an increase in electricity prices.

This week the European Parliament will decide ”again” about whether or not the Commission will be allowed to withdraw emission allowances from the emissions trading market. This so-called backloading would elevate the price of emission allowances and thus also electricity prices.

I have been responsible for the position of the biggest political group in Parliament for this file. In April, the Parliament rejected already once these backloading plans, but thereby also returned the issue to the responsible Committee. As a result of this process a toned down compromise was born, but – all the same – it is a proposal, which would elevate electricity prices. Therefore, the majority of our group still opposes the proposal.

Surprisingly, the backloading proposal became the hottest strife of this electoral term. Actors that have been dragged into the lobbying include even the Prince of Wales, the World Council of Churches as well as Arnold Schwarzenegger, who was shipped to Brussels last week to speak in favour of the matter. I am not completely convinced that any of the aforementioned actors understand what the issue is all about. A lot of false information has circulated in the media. Hence, some mistakes should be rectified and it has to be justified, why I have recommended my group to still reject backloading.

Backloading is not about reducing emissions but rather a decision of whether or not their reduction is cheap or expensive. Those who defend the matter using the argument that combating climate change requires backloading are giving a false image of the situation. Emissions trading reduces emissions automatically, because according to the directive, the system removes emission allowances linearly, i.e. 1.74% annually. Even if the allowance had a zero on its price tag, emissions would be reduced.

Emissions trading was supposed to seek the most cost-effective method to reduce emissions on the market – i.e. not the most expensive one. Therefore, a low price is not a threat to climate targets. What is significant is the knowledge that emission allowances are a vanishing resource and therefore, we should be investing in clean technology.

Emissions trading is an ingenious market-based mechanism, but overlapping legislation has disrupted the birth of a normalised electricity market. A good cause has been promoted by too many simultaneous means and the final result is a mishmash, in which nothing works properly. Especially domestic renewable energy subsidies have created an unhealthy situation in which normal price formation does not occur. At the same time, abundant subsidies have pushed up the energy bill of the consumer and have made renewable energy a guaranteed business opportunity. The huge subsidies lock the development of renewable energy to an unprofitable level, as support does not have to be sought from the market. If we really want to intervene in the low price of emission allowances, we should commence the process by getting rid of the subsidy forms that distort energy markets.

Meddling with the price will ruin the image of emissions trading as a market-based mechanism, which reflects the law of supply and demand. If politicians interfere with it, they will create an insecure investment environment in which not even the functioning of market-based mechanisms can be trusted.

It does not make sense to increase the price of emission allowances during an economic recession, as this will increase each and every consumer’s electricity bill and further disrupts the competitiveness of European industries, which is already challenged by other factors. The electricity prices of our competitors are already cheaper that ours. In the US, for example, the industrial energy consumer’s average electricity price is around 6 dollar cents/kWh, when in the EU it ranges between 9-17 dollar cents/kWh between Member States.

The price increase would hamper our industries’ competitiveness and would export European jobs. The defenders of backloading claim that these industries get their emission allowances free of charge, implying that the problem does not exist. They do not tell that the actual cost of backloading is indirectly formed through the increase in electricity prices. This cost increase cannot be alleviated by means of free-of-charge emission allowances.

The low price of emission allowances is not the reason for coal’s low world market price. Backloading cannot put an end to the victory march of coal either, as the price of emission allowances would have to go up to around 50 € per carbon ton in order for it to stimulate exchanging coal for natural gas. At the moment, coal is cheap – above all – because of the shale gas boom in the US: loads of cheap coal is now flowing to the global markets because of this phenomenon.

A unilateral and expensive climate policy is no longer a genuine climate policy. It could be called, for example, a low-carbon policy for production or an outsourcing policy of emissions or jobs, but the climate is not saved by acting alone. We should look at the bigger picture. The EU’s share of global emissions is around 10%; while in 2020 it will be around 8% and in 2030 4% respectively. If the others will not take responsibility for equivalent costs, EU reductions will turn into increased emissions elsewhere, when demand is responded to with dirtier emissions. International trade statistics show us that this is exactly what has happened. During the existence of the EU’s expensive climate policy, the Union has – as a matter of fact – increased its emissions, if we take into account its total emissions: i.e. not just production-based but also consumption based emissions, which are generated through the consumption of products imported into the EU.

We need a global climate treaty, but there are no signs of a willingness of large emitters to accept the EU way, i.e. the Kyoto strategy. This became again clear during Barack Obama’s climate statement last week: the US is not interested in setting emission ceilings, but rather in decarbonisation of the economy, investing in clean technology. Therefore, particularly the EU should be flexible and stop dreaming of some sort of ”climate leadership” – such leadership does not equal pushing the economy towards a downward spiral. While the EU has invested in expensive mechanisms and heavy regulation and bureaucracy, the US has invested in R&D. We frowned upon the country that decided to stay outside the Kyoto framework and labelled it a climate villain, but now we are facing a situation in which the US is able to reduce its emissions faster than we are.

We will vote on the matter on Wednesday.