Eija-Riitta Korhola (EPP, Finland) has been nominated for the MEP of the Year Awards in the Justice and Civil Liberties category. Advocacy and civil society organisations can nominate their candidates after which they are shortlisted for the MEPs to be able to elect their favourites.

The Parliament Magazine describes Ms. Korhola: ”Chair of the First Step Forum human rights organisation since 2002, Eija-Riitta Korhola has been nominated for being a ”champion of civil, political and women’s rights applying equally inside and outside the European Union”. First elected to the European parliament in 1999, Korhola has committed herself tirelessly to a number of policy areas. One of Twitter’s most outspoken and entertaining parliamentarians (…). A great believer in promoting ”Europe’s leadership in justice and civil liberties”, Korhola, however, is unafraid to speak her mind or to highlight the hypocrisy of first world nations and organisations when it comes to issues of universal human rights and dignity for all.” (Please check the shortlist here)

Ms. Korhola has been active in the so-called Human Rights Urgencies group, which drafts resolutions concerning urgent breaches of human rights worldwide. For example in spring 2013 Ms. Korhola was the first MEP to propose a resolution on the situation revolving around the Gezi protests in Turkey. Lately, she has been particularly active in promoting human rights in Egypt, Bahrain, Yemen and Kashmir. In 2014 Korhola has hosted events on e.g. the role of media in human rights and democracy as well as democratic processes in Egypt. She is an active participant in the EPP group’s interreligious dialogues, and she has advocated for, in particular, minority rights in her position as the President of the First Step Forum – an international human rights organisation.

”MEP Eija-Riitta Korhola has been instrumental in our struggle to promote human rights and dignity for all inside the European Parliament and beyond. She has been a close partner for several of our events and in the drafting of human rights urgency resolutions. The topics we have cooperated on include for example the role of media in human rights and democracy and free and fair democratic processes in Egypt. We warmly endorse her candidacy for the MEP of the Year Awards in the Justice and Civil Liberties category. It is well-deserved and there are few MEPs who are as devoted to the cause of human rights as she is.”

Ms. Korhola is very grateful for her nomination and thanks all partners and colleagues for their support. 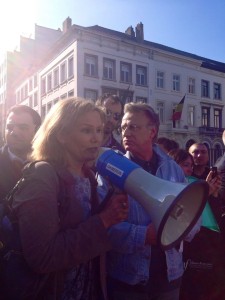